skip to main | skip to sidebar

The Ethnics are coming!

This is the actual front page of the real Daily Express today: 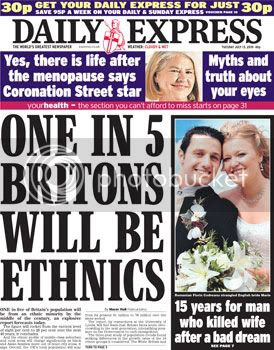 No, really. The Express have actually gone with ONE IN 5 BRITONS WILL BE ETHNICS as their headline. On a day when most papers are reporting pointless fluff like the unprecedented NHS cuts, the Express has gone for the real big story, the one about how there's gonna be loads of blacks and Asians living here one day.

First of all, the word "ethnics". It's my genuine belief/hope that in 10 or 15 years this will become a taboo racial slur. "Ethnic" simply means of or pertaining to a race. It doesn't really make sense on its own; you can be "ethnic Chinese" or you can be an "ethnic minority", but this reference to races other than your own as "ethnics" is a troubling usage of the word that has crept into the language recently and still, incredibly, remains used frequently by the mainstream media (or at least it does in the Express). It's a shortening of "ethnic minority" that takes all the meaning away and instead creates this divisive term; there's us, the white British on the one hand, and then there's those ethnics. It's a brutal-sounding word, there's something nasty about the way it sounds and I've heard it used by people who would probably have once said "darkies" in its place when looking for a catch-all description for non-whites.

It's a very clear message from the Express here; the rise in the number of "ethnics" is something that should worry us. Last night, when I first saw this story, the online version used a fairly mundane picture of a British passport. At some point between last night and this morning, this was switched for a more incendiary picture of two veiled Muslim women, as if 1 in 5 Brits will be niqab-wearing Muslims by the date not mentioned in the headline.

The story itself is just some figures projecting that people from an ethnicity other than "white British" on the Census will form 20% of the population in 40 years' time. I don't know if these stats are accurate, but to be honest it's not that important. Let's assume that's true. What's important is the tone and the placement of this story, and that shocking, pisspoor headline. This is a dry population prediction spun into something more damaging, the sort of story people will be using to demand we close our borders and keep the "ethnics" out, lest we lose our nebulous sense of identity. An identity which, one can assume, is wholly derived from our skin colour.

So, is it really a problem? What does it matter that in 40 years, British people won't just be white? It's not as if they are now, unless you subscribe to the BNP's "just because a dog is born in a stable doesn't make it a horse" maxim. Britain has a long and proud tradition of making people of other races who settle here feel British. You can't expect everything to remain the same, but by and large immigrants that settle here speak English and immerse themselves in the British culture. They help shape it, but that's natural; all cultures evolve.

When I read this story, I was reminded of a quote that stuck with me from a couple of months ago. Spurs defender Benoit Assou-Ekotto gave an interview to the Guardian about how he feels about football, which was most notable for the fact that he considers it a job above anything, rather than a passion. But also interesting was his perspective on racial integration; as a French-born player with a French mother who chose to play for his father's native Cameroon, he claims to feel no real affinity for France:

"...the country does not want us to be part of this new France. So we identify ourselves more with our roots. Me playing for Cameroon was a natural and normal thing. I have no feeling for the France national team; it just doesn't exist. When people ask of my generation in France, 'Where are you from?', they will reply Morocco, Algeria, Cameroon or wherever. But what has amazed me in England is that when I ask the same question of people like Lennon and Defoe, they'll say: 'I'm English.' That's one of the things that I love about life here."

And that, for the most part, is how it is. Personally, I think that's something we can be proud of. We have ethnic minorities who were born here and raised in this culture. Mostly, they identify as British or English, because that's what they are. Why should they be treated as if they're simply "ethnics"? Well, because the Express, frankly, is either suspicious and fearful of people who aren't white British, or thinks its readers are and panders to them. Remember, this isn't about immigration, it's not about illegal immigrants or "bogus" asylum seekers or alien cultures; this is a straightforward division the Express is highlighting between whites on the one hand and everyone else on the other. The "ethnics" include second and third-generation "immigrants", people who were not only born here but whose parents were born here, and who are British in every meaningful sense. Oh, but they're not white. Now, I don't want to cry racism at this, but bloody hell folks, you're making it fucking difficult.

It's just so depressingly familiar; mundane predictions rendered in apocalyptic tones, quote from Sir Andrew Green, ramblings about Poles, picture of scary Muslims, we've seen the story a million times before in the Express and the Mail, either by Macer Hall or James Slack. But today, with that headline, the Express may just have surpassed itself for spite and nastiness.
Posted by No Sleep 'Til Brooklands at 10:29

Other Things I Do